Rethinking Weddings in the Time of COVID by Katherine Gustafson

Rethinking Weddings in the Time of COVID

Wedding-planning has been disrupted since early 2020, but that hasn't stopped enterprising couples from finding other ways to fulfill their celebratory dreams.

It's no surprise that 2020 was not a good year for weddings. Party planning screeched to a halt as soon as COVID hit. Parties that were already planned were suddenly cast in doubt.

Many with visions of a perfect wedding day have had to confront postponement, cancelation, or a radical alteration of plans.

Tears were shed. Deposits were lost.

But resilience ultimately won the day. Brides and grooms-to-be met the uncertainty of the moment with various solutions from elopement to shrinking their parties to shifting destinations. Their stories offer inspiration to others who have just started their planning in this still uncertain time. 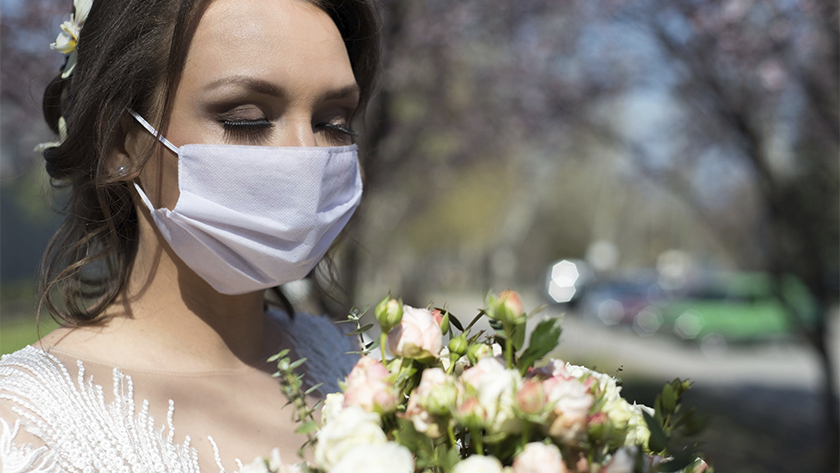 “This was a really tough year of “This wasn't how we imagined anything,"' says Makayla Robinson of Newton Falls, Ohio.

She and her fiancé, performers who met while working on Disney Cruise Lines, are getting legally married in May and planning a full wedding for September of 2022. The couple, who now run an online business doing personal training for couples, had originally planned to have a wedding in 2021, but it turned out to be too difficult to coordinate.

Robinson's partner is Canadian, and the two-week quarantine that would be required for his family members crossing back into the country after the wedding would make it impossible for most to attend.

“You never would have dreamed even a year and a half ago that you couldn't cross freely between Canada and the US," she says. “It's always been a given and part of what made our relationship possible."

Their venue is making special arrangements for an easy postponement in case border-crossing problems persist. In the meantime, they are getting married at the courthouse — or, by regulation, on the lawn outside — on May 21, 2021, with 10 people in attendance and the rest of the family on video conference.

The two-part wedding process Robinson and her fiancé are pursuing is not unique at the moment.

“As we open the 2021 season and start meeting with our couples, we are finding that a lot of the 2020 couples got married at the courthouse and now are using their rescheduled wedding as more of an anniversary party," says Barbara DuMont, team lead at Brownstone Gardens, an outdoor wedding venue in Oakley, California.

Shrink It Down, Call It a Day

Carrie Herk of Denver and her fiancé had originally planned to get married in October 2020, but when July hit with the pandemic still raging, they knew it was time to look at other plans.

They shrunk the size of the October wedding down to 50 people and planned to host a second, bigger party in 2021. They held the 2020 wedding in the outdoor space at The Lobby, a restaurant and event venue in Denver, and had the reception inside with as much masking and restriction of mingling as possible.

Herk says her guests were compliant with the mask rules, and the day ended up being a wonderful experience. After getting married in October, the couple decided they didn't want to go through with the bigger 2021 wedding party after all.

“Everyone has a dream of their wedding their whole lives," says Herk. After her experience, she would advise letting go of those expectations. “If you're surrounded by people who mean the most to you, it's probably going to be a really good day. Having 50 people there was perfect. It was really intimate and a lot of fun."

“People are downsizing their weddings a little bit; I rarely get inquiries for 200 people anymore," says Jody Hafey, owner of Nantahala Weddings and Events, an outdoor venue in Topton, North Carolina. “We did have quite a few micro-weddings and elopements over the winter, and we didn't even offer that before. Now we do it all the time."

When March 2020 came around, Kerry O'Donoghue of Manhattan Beach, California, knew she couldn't send out her newly purchased wedding invitations. She was scheduled to get married on August 22, 2020, in Dublin, Ireland, where much of her family lives. And she and her fiancé were expecting 80% of their 120 guests to travel from the USA to Ireland for the wedding.

They initially worked with their venue to reschedule to August 20, 2021. But due to slow vaccine rollouts, continuing high COVID cases in Ireland, and quarantine restrictions, they decided in February to cancel the Ireland wedding altogether, a decision that cost them some $6,000 in lost deposits.

“Having the two-week quarantine for everyone going there, that's not possible," says O'Donoghue, and founder of The Mine Company, a bridal wellness brand. “We knew it was time to pull the plug and just call it a loss. It was a difficult decision — to eat that cost."

In April, they decided on a new plan: Hosting a wedding in Cabo, Mexico, on January 30, 2022, with approximately 60 family and close friends. Mexico was appealing because the country's regulations for group events are more relaxed than California's, where only three to four households can attend a wedding at the moment. Ending up with a smaller wedding will help make up for some of the financial loss from the cancelation.

O'Donoghue is glad she went to such pains to find a plan that would allow her to have the magical day she had always imagined. She advises other brides-to-be that stretching to find a plan that will work is worth the difficulty of having patience in the face of so much uncertainty.

“There's probably a lot of pressure from family members or other people who aren't going through it," says O'Donoghue. “But you should still have your dream day."