Who Gets the Debt: Bankruptcy and Divorce by Michelle Kaminsky, Esq.

Paying off all debt before filing for divorce would be the ideal situation, but since that isn't always possible, courts presiding over divorces are charged with allocating a couple's debt as well as their assets. How do they do that? Read on.

The most critical factor in determining debt division in divorce is applicable state law. Most states are “common law property” states, which means that, generally, debts in the name of one spouse remain the responsibility of that spouse alone after divorce.

There are exceptions, however, even in common-law property states. For example, debts incurred for family necessities or living expenses, which can include groceries, housing, utility bills, and school tuition for children, are often considered joint liabilities according to state law. There may be other nuances as well, so it is extremely important for divorcing couples to understand the laws that apply to their situation.

Moreover, in common-law property states, it is up to the judge to divide debt upon divorce, so he or she may take into account such considerations as whether one party ran up credit card debt without the other's knowledge and who benefited more from the debt. Other factors a court may consider in its judgment include the length of the marriage and the relative financial situations of the parties, both upon entering into the marriage and during the marriage itself.

Alternately, nine states (Arizona, California, Idaho, Louisiana, Nevada, New Mexico, Texas, Washington, and Wisconsin) are “community property states,” which means that debts acquired by either party during a marriage are jointly held. Alaska allows married couples to choose if they would like to “opt in” to a community property treatment of their marital property and debts.

Even in community property states, however, debts incurred before the marriage by one spouse do not usually become the responsibility of the other in the event of dissolution. Again, however, state laws vary greatly on specifics, so be sure to understand the laws in your state.

Generally, state law regarding marital debt also applies in states that allow same-sex marriage, domestic partnerships, and civil unions, but only in those states in which such arrangements are considered the equivalent of marriage. Remember that some states allow such types of unions but those couples still do not enjoy the same legal rights as married couples. Accordingly, the laws concerning marital debt may not apply to them either.

Property Seizable to Pay Off Debts

Just as with debt division, the most important consideration regarding whether creditors who win a judgment may file a lien against real estate to satisfy an outstanding debt is whether a state is a common law or community property state. Not surprisingly, in community property states, since most debts are jointly owned, a creditor can generally go after joint property and income to cover such joint debts.

In most common law property states, however, joint property may be seized only for debts incurred for family necessities and living expenses, which could include the mortgage on a house even if only one spouse's name is on the title. Debts held by one spouse, though, do not usually entitle a creditor to go after joint property or income.

Another consideration may be if real estate is held in “tenancy by the entirety,” which means that each spouse owns the undivided whole of the property. Some common law property states provide explicitly that creditors cannot seize such property to satisfy debts held only by one spouse.

Impact of Prenuptial Agreements and Other Agreements

Of course, if a couple has signed a valid prenuptial agreement that includes a provision for debt division upon divorce, its terms will be upheld by the court. In such instances, the property laws of the state where the couple has filed for divorce wouldn't make a difference. Couples can also sign agreements with specific individual creditors removing one spouse's liability for future debt to that creditor or negotiate with each other during divorce settlement proceedings regarding debt division.

In any event, knowing the laws of your state regarding property and debt division upon a dissolution of marriage is always a good idea so that you can plan to protect yourself and your assets long before facing a judge in court. 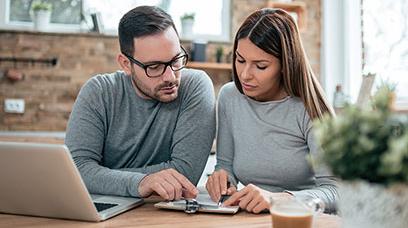