How the New Democratic Congress May Change Tax Laws

With a new Democratic Congress, tax law is likely to change yet again. Many politicians are touting plans to reverse the Trump administration's tax policy and change the tax code in other ways.

No one really knows what will happen or when, of course. But it's still possible to predict some changes, speculate about when they'll happen, and look at what they might mean for consumers and small businesses.

Here are six possible tax changes to watch for.

1. Increases to the Corporate Tax Rate

The Trump administration lowered the corporate tax rate from 35% to 21% in the 2017 Tax Cut and Jobs Act (TCJA), with the caveat that the change would phase out after five years.

Democrats can focus on accelerating the phase-out to get the corporate tax rate to go up as soon as possible, says Luke Frye, CPA, and co-founder of Timber Tax Accounting in Washington.

Democrats are likely to boost the marginal tax rate for people who earn over $400,000 in income. The current federal tax rate for these earners is 37%.

“Could that go up to 39%?" asks Sean Mullaney, CPA, financial planner, and owner of Mullaney Financial & Tax, Inc. “There's a devil in the detail on all of this stuff."

The Qualified Business Income (QBI) deduction, otherwise known as Sec. 199A, allows individuals (and some estates and trusts) to deduct up to 20% of QBI from a pass-through business. The Democratic Congress may eliminate the deduction altogether, eliminate it for the highest earners, or change it in some other way.

“The 199A deduction is the biggest wild card to look out for as far as planning," says Frye, who works mostly with clients who own pass-through entities. “That's a huge benefit, so if that's modified, it would be a major thing."

Many U.S. taxpayers currently receive the premium tax credit toward their purchase of private health insurance. Considering their supportive stance toward enabling widespread insurance coverage, Democrats in Congress may change the qualification rules so that more people can take advantage of it.

The only potential disadvantage to taxpayers, warns Frye, is that if you end up making more than you predicted in a given year, you may have to pay the credit back at tax time.

“I think it's pretty common for people to estimate low if they're trying to qualify for something," he says. “If you're self-employed, you may not have total control of how your earnings work out."

5. Alterations to Retirement and Pension Rules

Mullaney sees the possibility that some new rules may limit the effect of 401k plans. The rules about contributions, such as contribution limits, are likely to stay the same. But some of the ideas being tossed around—like a 26% tax credit for 401Ks—would disincentivize low-income people from using a Roth 401K while pushing folks at upper incomes toward this type of product.

“The effect is to flip it," Mullaney explains. “Right now, if you're in a lower bracket, Roth 401K is better. But in this new conception, Roth would be better for higher tax brackets."

A Democratic Congress may well boost capital gains tax a lot, even going so far as to double it by treating capital gains as regular income.

If this plan takes shape, onlookers should expect a massive fire sale of assets before the new policy's effective date.

Frye expects to see some changes to the tax laws within the first 100 days of the new administration, especially any rules tied to healthcare due to the urgency of the COVID-19 pandemic.

Mullaney predicts a slower process, based on how long it took Republicans to pass their bill in 2017 when they had bigger majorities than Democrats do in the new Congress.

“That teaches us that it's highly unlikely that the bill will be effective in the year 2021," he says. “It's most likely that the new rules would apply for 2022, so there'll be some time to do some planning once we see legislative language."

Financial Planning 101: What newlyweds should know

You just got married. You're ready to start your life together—but what about your finances? This may not be the most exciting aspect of your new, “just married" life together, but it's one of the most important. 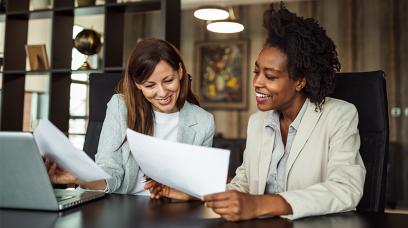 What is a digital transformation strategy, and why does your business need one?

Digital operations are the future of business. Companies that embrace this change will be better poised to succeed as the business world continues to shift.

Both a family trust and a living trust can help you achieve your estate planning goals, but which one is better for you depends on your needs.

Why Chasing After Competitors Isn't Always the Best Strategy

To succeed in business, don't chase after your competitors but instead find ways to stand out, define yourself as unique, and gain a loyal following that knows how special you are.