What Is Modified Adjusted Gross Income (MAGI)? by Maria Murphy

How the IRS defines and calculates different types of income affects taxes due. Modified adjusted gross income (MAGI) is one of them. MAGI is also used to determine eligibility for certain tax benefits and government-subsidized programs.

There are different types of income for tax purposes. How the Internal Revenue Service (IRS) defines them and how taxpayers calculate them affects the amount of taxes they will pay. Modified adjusted gross income (MAGI) is one of them.

What Is Modified Adjusted Gross Income?

Modified adjusted gross income is the amount taxpayers use to determine whether they qualify for certain tax deductions, including the deductibility of contributions to 401(k), traditional and Roth IRAs, and interest on student loans.

In general, having lower MAGI means having a better chance of qualifying for tax benefits and programs. There are different definitions and calculations of MAGI depending on what it's used for, so it's important to apply the correct definition of MAGI to the particular benefit claimed. In addition, the cap on MAGI for certain tax deductions can change each year.

How Is it “Modified?"

MAGI isn't on the tax return but is calculated based on amounts that do appear on the tax return. The starting point for calculating MAGI is adjusted gross income (AGI). From there, certain deductions are added back. If a taxpayer doesn't have any of those deductions, it's possible for AGI and MAGI to be the same. But if qualified deductions exist, MAGI will be greater than AGI.

Gross income includes income from all sources, including cash, property, and services received. It's included on Form 1040, U.S. Individual Income Tax Return, on line 9 and labeled total income. For businesses, gross income is the same as gross profit, or revenue less cost of sales.

AGI is gross income less certain adjustments known as “above-the-line adjustments" because they reduce gross income before any other deductions, such as standard or itemized deductions. AGI is important for determining eligibility for certain tax deductions and tax credits and determines what tax bracket a taxpayer is in. It's included on line 11 of Form 1040.

The total adjustments to income are included on line 10 of Form 1040 and come from Part II of Schedule 1, Additional Income and Adjustments to Income. They include contributions to IRAs and self-employed retirement plans, self-employed health insurance premiums, self-employment taxes paid, health savings account contributions, student loan interest, educator expenses, and certain moving expenses and alimony payments, among others.

How Is MAGI Calculated?

To determine MAGI, once AGI is determined, additional adjustments are made to add back certain deductions and tax-exempt income. Some common adjustments are IRA contributions, half of self-employment taxes, tax-deductible student loan interest, passive income or losses, rental losses, non-taxable Social Security benefits, and excluded foreign-source income, among others.

There are many reasons MAGI is important in filing accurate tax returns and qualifying for tax credits and other benefits. Although the calculations can be confusing, it's important to understand the situations when MAGI is used and the resources and instructions available from the IRS and government agencies that can help.

What tax return does a business need to file?

What Is a Trial Balance?

While a trial balance is not a financial statement, this internal report is a useful tool for business owners. It lists all of the account balances in the general ledger. It is also used at audit time to see the impact of proposed audit adjustments.

Section 179 is a relatively small clause in the IRS tax code that can potentially yield big savings on equipment purchases. Understanding how to maximize the deduction is key. 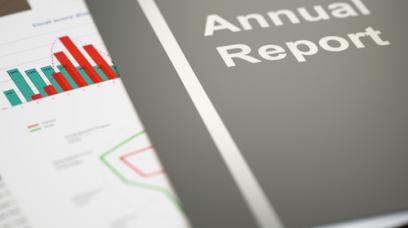 How to file an annual report

In many states, corporations, LLCs and other business entities must file an annual report. Learn more about annual reports and follow our step-by-step guide to preparing and filing one.

Revenue vs. Profit: What's the Difference?

Revenue and profit are both good signs for your business, but they're not interchangeable terms. Both represent an important way to understand your business.

What Is Gross Profit?

Gross profit is a key profitability figure for a small business. It's calculated by subtracting cost of goods sold from sales revenue. Here's how you can use gross profit, and the gross profit margin, to measure your business's production efficiency.

What Is Current Ratio and How to Calculate It

Current ratio is a measure of a company's liquidity, or its ability to pay its short-term obligations using its current assets. It's also a useful ratio for keeping tabs on an organization's overall financial health.