How to File a Divorce in California by Edward A. Haman, Esq.

How to File a Divorce in California

In California the divorce procedure is called a dissolution of marriage. A dissolution for any married couple will accomplish two things: (1) severing the marital relationship, and (2) dividing assets and debts. If they have been married for a significant length of time and one of them will be unable to be self-supporting, the issue of alimony may arise. If there are minor children, they will need to resolve issues of child custody, visitation, and support.

There is a summary dissolution procedure if all of the following conditions are met:

Grounds are legally recognized reasons to get a dissolution and sever the marital relationship. California has what is commonly called a no-fault ground for dissolution. You need to state in the Petition that: “The parties have irreconcilable differences which have caused the irremediable breakdown of the marriage.” The only other ground for dissolution is the “incurable insanity” of your spouse.

In California alimony is called spousal support. In deciding whether to award maintenance, and the amount and duration, the judge must consider the following factors:

If you have any minor children, there will have to be a custody determination. There are two aspects to custody: legal custody and physical custody. Legal custody refers to the right to make major decisions for the child, and physical custody refers to where the child lives. Traditionally, one parent was awarded custody, and the other was given visitation rights. California has adopted a preference for joint custody. The idea is that both parents should continue to be involved in decision-making, and both parents should have significant contact with the child. But it all still comes down to figuring out how time with the child will be divided between the parents, and how decisions will be made.

According to California child custody laws, if the parties cannot reach an agreement on custody, the judge will make a decision based upon the best interest of the child, considering:

Children must be financially supported. This almost always results in one parent paying money to the other. Child support takes into account the needs of the child, and each parent’s ability to meet those needs. This is done by referring to the California child support guidelines. Forms that can be used to apply the guidelines to your situation may be obtained from your county’s Superior Court clerk.

A Judgment of Dissolution of Marriage is not final until six months after service of the Petition on, or the appearance of, the other party, whichever occurs first.

If you and your spouse agree on the major issues, an online divorce may be right for you. Otherwise, you can talk to an attorney to get advice or help filing for divorce with the LegalZoom personal legal plan. 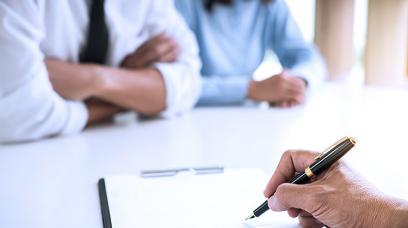 10 steps to getting divorced in California

To help you understand what is involved in getting divorced in California, the process has been broken down into 10 basic steps.